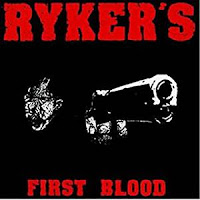 
And here it comes, oh yeahr, the final entry and article for this very year of 2018 in the "CLASSICK OF THE MONTH" series with the "DECEMBER 2018" edition, yes, and the "CLASSICK OF THE MONTH - DECEMBER 2018" is none other than the groundbreaking 1995 "FIRST BLOOD" EP of'n'by the RYKER'S released back then via the today (for what reasons ever may differ) Pretty legendary "LOST & FOUND RECORDS" and it was back then the third release of'n'by the RYKER'S following "PAYBACK TIME" (1994, "LOST & FOUND RECORDS") and "BROTHER AGAINST BROTHER" (1994, "LOST & FOUND RECORDS"), two (also) absolutely legendary and damn great and also personally to me very important albums that were followed up in 1995 by "FIRST BLOOD" and this very EP is definitely an all time classick for'n'to me and it is also still up to this very present day one of the if not even my personal-most-favorite-album that the RYKER'S have ever done and also like with so many and the most if not in fact sort of all albums in'n'of this very series there are also so incredible many fantastic memories linked to this album and that certain time period back then so that it also definitely owns and has a huge emotional meaning to me, definitely, but also all this 'personal blah-blah' aside the RYKER'S' "FIRST BLOOD" EP is nothing but and nothing less than a damn great album and personally to'n'for me also one of the defining moments of European Hardcore in the mid 1990's and it was and still is and surely will sort of forever remain a fantastic EP and this from start to finish, yes, and it was re-released (on vinyl) for all the right and more than well justified reasons some time ago. Back then the RYKER'S played it all far more raw and angrier and more in a direct Hardcore Punk way and with only slightly Metallic Hardcore notes and only very, very, very slighty Streetpunk marks mixed into their crushing massively by New York Hardcore inspired devastating and raging Euro Core especially comapred to later and also their present sound'n'style. Btw, I don't want to repeat myself all too often ever and again and so just short here'n'now the RYKER'S were back then in the 1990's one of the very most important and succesful Hardcore bands in central europe establishing the greatness that shall become known further on as Euro Core and together with bands like BRIGHTSIDE, BACKFIRE!, DEVIATE, HARD RESISTANCE, ONLY ATTITUDE COUNTS, RIGHT DIRECTION, and so on they formed the spearhead of it back then, yes, and this for nothing but the most highly deserved'n'justified reasons. And like all the mentioned bands here also the RYKER'S, yes, as far as their was and is sort of a 'common ground' to all this bands on which they were born and bred anyhow all this bands had a decent and own tone and their own style, yeahr, and so also the RYKER'S. Hm, and maybe especially here on and with "FIRST BLOOD" sort of the very most. (At least so in my book, or so to say.) The foundation was heavy and harsh New York Hardcore somewhere between the CRO-MAGS, BIOHAZARD, and AGNOSTIC FRONT with a damn sinister and highly intense approach to it all that always reminded and still reminds me 'atmospheric-wise' of/at CARNIVORE. To this they added some few healthy doses of SLAPSHOT and old tyme Straight xxx Edge Hardcore a la YOUTH OF TODAY and a harsh direct and compact evil sawing Hardcore Punk identity and a grim and nasty, an ugly and proud and angry bastard was born and raised and finally named "FIRST BLOOD", an early milestone delivered by the almighty RYKER'S. A huge own identity the RYKER'S showed already back then especially thanks to that damn harsh and sharp slashing guitar tone, the incredible massive beating bass, and Kid D's very characteristic and accentuated lead vokillz. And also the drumming showed a very decent and own fast raging playing-technique to it all. Intense and compact, heavy and mad'n'evil raging, to the point played and written and yet massively tension-building, rousing and just overwhelming devastating and battle-scarred/militant songs full of huge dynamics and filled to the burtsing levels with energy non stopp and still today so incredible fresh and alive/lively, great and relevant as back then 23 years ago, yes, and all 'explodingly' hammered out by sawing guitar playing, crushing bass work, smashing drumming, and pissed-off angry into the mic and through it out in(to) the world spitted vokillz with some harsh backings and all done in a totally unique and own way, yes, that's what we got and that's what we still get from the RYKER'S' "FIRST BLOOD", hell yeahr, and all is crowned by a fantastic YOT cover and a hidden atomizing grinding bonus track. Add angry and outspoken and nicely diverse lyrics, a damn sinister artwork, and a 'perfectly to it all matching' raw and hammering production-sound and you (will) see that and why the RYKER'S delivered back then in 1995 with "FIRST BLOOD" an outstanding and still today totally amazing and stand-alone album that any fan of raw sawing, heavy crushing, and harsh roaring, highly intense, militant and dark, and onwards storming Hardcore (Punk) definitely should know and own and I hope that with this little article here'n'now I maybe brought a new gem to your attention that you before haven't had on your radar screen or that I managed to point your attention finally again to this purest platinum masterpiece. I would really hope so. I simply and really love this little great album and it means so damn fucking much to me and so only thanks to the RYKER'S for their "FIRST BLOOD" EP and to do this little tribute to it was a huge pleasure and a great honour for/to me. And, btw, the RYKER'S are still damn active and also today you definitely should still check them out and follow them. Hardcore!!! Fist!!!
https://de-de.facebook.com/rykershardcore (-the link to the facebook site of the band) 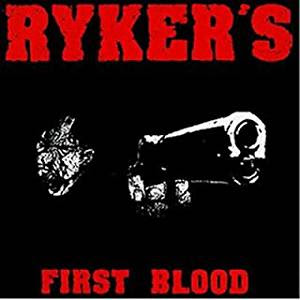