*** THE BIG BAD GERMAN WOLF CONQUERS THE STATES AND THEN 'TOMORROW' THE WORLD *** (And DENNIS, do all of us German Silverbacks the favor... and GET 'EM ALL!!!) 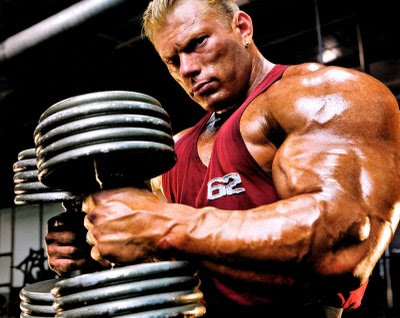 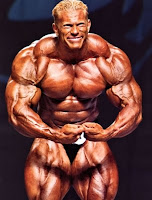 
damn it, I can't tell ya currently correctly how long it's now ago since the last post of the category of 'Sports' saw the fading light of the grey days of this time we live in here on this very blog. Puh, and I can't tell ya why this took me so long. I mean, sport/-s (pumping iron, endurance training, cardio-training, jogging, swimming, bicycling, etc. pp.) is one of my biggest passions and pleasures and more and more sometimes today even more important than music and so I really can't tell ya why this all here now took me so long to get it all done. But anyhow, a big 'Sorry!' for this massive delay goes out to you all, respectively all of ya out there who had been waiting so damn long for this next and new 'Sports' post here. So, okay, enough of the 'crying' and 'wondering' here at this point at this time, and now comes finally a new post of the 'Sports' category. The last one was a tribute post to one of the greatest in K-1 today, SEMMY "HIGHTOWER" SCHILT but now we will change the direction of things here on this blog and leave the world of K-1 and MMA to enter (after WILLIAM "BRANCH" WARREN finally again) the world of Bodybuilding and cold steel and pumping iron and I'll now introduce you one of the guys that made a huge statement in returning stronger than before last year and left a mark by making with his comeback performance a massive promise for 2011 and the future years to come in general. I'm talking about no one else than DENNIS "THE BIG BAD GERMAN" WOLF and his hunger for success. So, yeahr, here we go!!!
*** DENNIS WOLF - THE BIG BAD GERMAN WOLF IS ON THE HUNT AGAIN *** 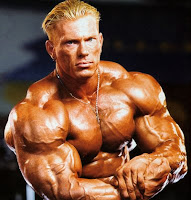 ﻿ DENNIS WOLF was born in 1978 at the 30. of October in the city of Tokmok in the country called Kirgistan (or Kyrgyzstan). I can't tell ya anything about this town with the to my german ears and tongue pretty strange name in this far away country (okay, okay, it depends on where you are - which means where you live and where you are reading this- if it is a far away country or not to you and your neighborhood), and I also can't tell ya anything 'bout DENNIS WOLFs lifes and crimes in Tokmok and maybe also Kirgistan in general until 1992, 'cause in 1992 DENNIS WOLF and his parents moved over to good old Germany (but don't ask me 'bout the "Why's?" and "How's?" of that move, 'cause also 'bout this and that I just couldn't find anything in the endless amplitudes of the World Wide Web, but anyhow I still do think that it is pretty damn good that some things are and stay private also this days). So, yes, okay, in 1992 he arrived over here in Germoney and became a german citizen and then it all began.
(...) 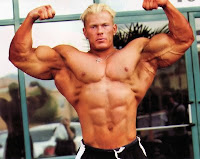 Okay, we're back in 1992﻿, DENNIS WOLF and his family are finally in Germany, living back then in the german city of the name of Marl, back in 2002 he moved over to live in the german city of the name of Datteln. When he once started with Bodybuilding it was nothing else than a hobby for him, but thanks to his damn good genetics he started soon to grow heavily and so he archieved and earned a lot of impressive success and respect pretty soon, so that he started focussing on it (the Bodybuildng way of life) and in 2003 he was invited to do a public performance in the USA. He took his then girlfriend and now-a-days wife Katja with him, and when they returned after something like four weeks or s they returned as a married couple. And that they're still today. For all what I know DENNIS WOLF and his wife are today living in the States, but so sure I'm not about it at all, but at least I do really think so.
(...) 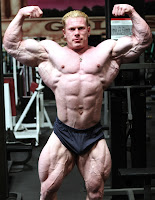 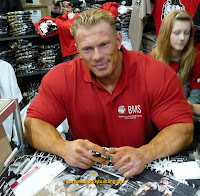 2006 was DENNIS WOLFs first year as a professional (IFBB) Bodybuilder. He competed first at the 2006 Europe Supershow in Arlington, Texas (don't ask me why a so called 'Europe Supershow' takes place in Texas, but okay, anyhow...;-)...) where he scores in at position # 07, moved on to the Montreal Men's Pro in Canada where he reached position # 05 and also still in 2006 he competed at the Santa Susanna Pro Grand Prix in Spain taking position # 03 with him and this event was also the qualification for the Mister Olympia in 2006. And so in 2006 he competed for the first time at the Mister Olympia, finishing at this his first Mister Olympia experience at the position # 16, and what now may sound not that "Whoooaaaaaa!" at all to ya was a first decent result for DENNIS WOLF to become well-known in the world of professional Bodybuilding. In 2007 DENNIS WOLF competed at the New York Pro (taking position # 03 with him), at the Keystone Pro (taking the victory with him, great), and again at the Mister Olympia where he archieved a damn good position # 05. In 2008 and 2009 I just know about him participating at the Mister Olympia, and while 2008 was great for him finishing at position # 04, 2009 really was a huge dissapointment for him, his team, his family, and all his friends with just reaching position # 16 and all the whole wide world of professional Bodybuilding was talking about that DENNIS WOLF would have his future in Bodybuilding already behind him after this performance and this kind of 'success'. But he should proof them all wrong, with returning stronger than ever at the Mister Olympia in 2010 archieving a damn good position # 05, and that's just great!!! Also in 2010 he scores at position # 03 at the New York Pro. A lot of ups and some (major) downs already DENNIS WOLF lived through in his career, and after 2010 he's counted at one of the future Mister Olympia's and as the future of professional Bodybuilding. And after DENNIS WOLF was featured in some very good articles in the "FLEX" (at least the german issue of this damn great magazine) over the last year you really know that his hunger is back, how fucking awesome hard he works and trains, and also that he will move on in conquering the world of Bodybuilding also in 2011 and much more longer in the future. Ah, yehp, DENNIS WOLF is 180 cm height and during 'his' off season he weights 280 - 300 pounds, and during 'his' season he weights 258 pounds.
(...)

DENNIS WOLF is an IFBB Pro Bodybuilder, and he's sponsored by BSN and MUSCULAR DEVELOPMENT and (for what I know) he's training in the U.S.A. at the "GOLD'S GYM", and for 2011 he also already settled a pretty impressive schedule together. He will compete at the 26. of February in Los Angeles at the FLEX Pro, from the 4. to the 6. of March at the legendary Arnold Classic in Columbus, to go after this to Australia to compete at the Australia Pro in Melbourne at the 12. of March, to compete at the 02. of April in Ottawa at the NPC Mid Illionois Championchip and to go after this back to Germany for a 'guest-appearance' at the very well-reputated FIBO exhibition in Essen from the 14. to the 17. of April. (Hopefully my girlfriend, she will also be there, can take an autograph or so for me, haha;-)...) The next two appearances of DENNIS WOLF will be also 'guest-appearances', at the 04. of June in Wichita at the 2011 Supplement Giant and at the 09. of July in Trinidad. So far his last announced event will be again the Mister Olympia competition from the 24. to the 25. of September in Las Vegas. So, you see, he's got a lot of hard work in the gym standing before him, waiting for him, huge massive amounts of iron are waiting to be pumped by him. But I'm pretty sure, that he will be succesful in 2011, let us wish him all the best for this very year.
(...) 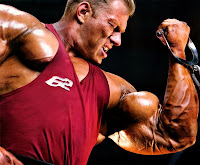 Okay, that was all about DENNIS WOLF what there was to tell to you up to this very point here at this place, but you can be sure that there will be coming more about him in the future of this blog. So what will still follow here and now are some videos of him at work for ya, and the next 'Sports' postings will be coming pretty soon (or at least I do hope so) and I have a lot of good ideas planned for ya. Be prepared for some good stuff for ya to come. (And much more sooner than this one here finally saw the light of the day, I promise this to all of ya interested readers out there.) Ah, one last thing, just to point it out directly and precisely: DENNIS, my honest congratulations for your hard work and your great comeback in 2010 and onward to a hopefully even more great 2011, and JAY CUTLER should be watching out the tracks for ya to come, so damn it and hell yeahr, just fuckin' GET 'EM ALL!!! Honour, much respect and my honest congratulations to DENNIS WOLF!!! 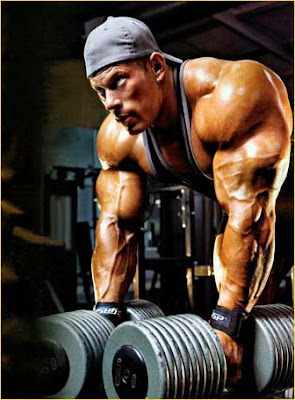 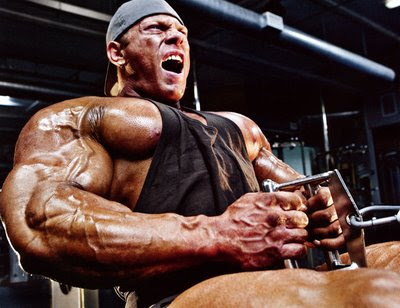