"Bitch just the shut the fuck up and then now just give me a bass line!" 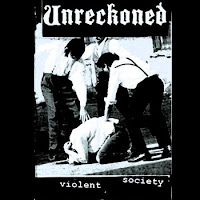 Found this band and release while I was surfing through the web recently (A big "Thanx a lot one more time!" goes out to the great "THANKS, IT CAME AS A SET" blog that all of you should really check out regulary) and promptly downloaded it. This is a new band from the windy city of Chicago and (for all what I do know) this is their debut demo release and it's done completly via the D.I.Y. way and released solely (?) through an official and authorized free download from the Bandcamp page of UNRECKONED themselves (released recently in 2011, which means this year... I know... you know... anyway...). And after it's something totally by the authorized download affair I will (as usual) post also the link to the Bandcamp site of the band at the end of this review. What I heard took me by storm, UNRECKONED own the potential to become one of the strongest and most leading bands in the today's world of (more than 'just' good) Hardcore music, if they keep on working as focussed and as strong and on a such an (already incredible) high level of standard and quality like they do it here and when they get some of the attention they really need and (much more than this) totally damn deserve. UNRECKONED (I really don't know anything more yet about them so I'm very sorry but I just can't give ya anymore further informations about or to them) play some damn amazing fresh Hardcore cocktail out of classical NYHC reminiscences (think first about MADBALL, AGNOSTIC FRONT and also some 25 TA LIFE), a very good portioned dose of totally devastating Beatdowns (think about modern and somehow metallic up to date Beatdown Hardcore bands like for example UNIT 731), some pretty few 'sludgy' rhythm work and structure arrangements (that reminds you while you listen to them quite a bit of the almighty EYE HATE GOD) and some very fast paced raging up tempo punishments in between some old school Trash Core marks (think about legends like CRYPTIC SLAUGHTER, just for example) and maybe also (maybe even more) some good Powerviolence notes. In between this styles, NYHC, Beatdown Hardcore, Sludge and Trash Core or maybe better Powerviolence, with the NYHC and the Beatdown Hardcore taking the lead before the Sludge and the Powerviolence/Trash Core cocktail, there are UNRECKONED to be located and they do it all already more than just damn good, because this is nothing else than a great offering and an even greater early display of fidelity by them. The guitar work is really marking the songs very, very strong, with it's devastating down tuned sinister and ultra-heavy and über-brutal riffs and also rhythm force, and the extreme Hardcore Shouting vocals are pure gold and damn charismatic shit on a very, very high level of quality. The bass work is great and pretty present and some really hard and heavy and aggressive thing, and the drumming is pound for pound and beat for beat a brutal stomping military machinery that nearly explodes because of power, might and force. Awesome shit!!! The arrangements of the songs are cool and really grapping, so that this guys know how to play their instruments as well as they know how to write truly more than only very good songs. The lyrics seem to be some good and pretty massive affair (but aren't part of the download, and that's the reason why they only 'seem to be' this and that), the artwork is a great one, and the production sound is just damn good shit and sounds already pretty professional. The only problem I have with this release is that it just contains four songs (and a really great and pretty cool anyhow intro sample) in something like around ten minutes and this is simply far too less by this great, great band. I hope that we will pretty soon get more to listen to by UNRECKONED and until then you better start to get this amazing Hardcore monster with downloading it finally, and then just enjoy it. And, btw, don't you forget: "PLAY IT LOUD MOTHERF****R!!!" Damn great shit!!! I highly recommend this band and demo to everyone of you out there who knows about the greatness of Hardcore music. HARDCORE!!! FIST!!! (9 of 10 points)
(http://www.myspace.com/thisisunreckoned)
(http://www.facebook.com/pages/UNRECKONED/90926285414?sk=info)
(http://unreckonedhc.bandcamp.com/)
Eingestellt von Manslaughter-Andy (aka Andy Sinclair @ Facebook) um 01:07