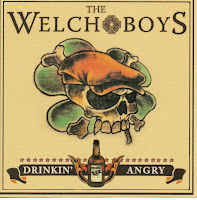 Yeahr, it's still the current/up-to-date record of this band from Boston. Uh, Boston? I can hear your brain start to go dang-dang-dang, and you're fuckin' right: How can a band that's something like bad come from this city!!!???!!! And you know what - they are playing a mixture of Oi!, Streetpunk and fuckin' Hardcore with that typical Boston note. Like I said, dang-dang-dang, "how can this be anything how-ever bad"!!!???!!! Like you should know, some guys of THE WELCH BOYS had played in great and legendary bands like SLAPSHOT and THE BLUE BLOODS before. THE WELCH BOYS still play their above mentioned mixture of Oi!, Streetpunk and (of course, pretty much old school and also prettymuch the Boston style) Hardcore. Fast and furious (no, not like the movies...) guitar work, very melodic, but yet fuckin' ass kickin' hard, the grumpy and 'hard-and-smart' vocals, and full and "fat" crew back-ups/gang shouts mark the music pretty much, and the clever arranged songwriting, the nice changes in the pace of the different songs, the powerful and very well-versed rhythm section (drums, bass), and the just fine and cool guitar leads ensure the damn good quality and high level of the musical work of THE WELCH BOYS. In contrast to their (also brilliant) self-titled debut record the Oi! and Streetpunk elements are a lot stronger than the Hardcore notes, but that don't matters that much at the end of the tracklist, if you know what I mean. What I also like damn much is, that THE WELCH BOYS do play their very unique style of music. Yeahr, you hear that the guys are around for quite a while, and they know how to play their instruments and how to write grapping and moving songs. Thumbs up!!! Maybe at least describable as a mixture of BULLDOG SPIRIT, DISCIPLINE, MOUTHGUARD and MURDERER'S ROW, and if you like SLAPSHOT and THE BLUE BLOODS you should also risk an ear (okay, honestly their is no risk at all to it...), 'cause some little spirit of the past of some bandmembers roams this songs from time to time. On top we do also get a lot of very, very good, just great lyrics 'bout a lot of many, different, and wide reaching topics. They're sending huge fuck off's to the islamofascists and terrorist, to child-molesters and aimless gang violence and brainless mob mentality, they salute and honor the fighting forces, singing 'bout some irish roots, dealing with a lot of certain personal issues, and much, much more. Just really fine lyrics, and they do also a fuckin' good cover of the ANTI-NOWHERE LEAGUE classic "Let's Break The Law", which will rock you out of your stomping boots!!! Then we get also a just awesome lookin' artwork, and a very fat and transparent, yet raw and dirty, perfect to the music fitting production sound. So there's nothing left to say, you should know what you have to do right now!!! Damn, this awesome band really deserves a bigger support!!! Right now!!! (10 0f 10 Points)
(http://www.myspace.com/thewelchboys)
Eingestellt von Manslaughter-Andy (aka Andy Sinclair @ Facebook) um 22:03