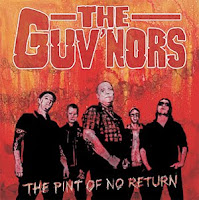 Here are THE GUV'NORS rocking and rolling straight out of Denmark. To be honest I must admit that this is the first release that I've heard of them. Hm, and I'm thinking about it, but currently just the Death Metal band of the name of ILLDISPOSED is coming to my mind as another danish band, hm, and when I'm not totally wrong then also the great Hardcore roughnecks of BARCODE and the well-oiled Metal machine of HATESPHERE are also coming from Denmark. So, that's all, but beside the fact that they are coming from Denmark and also play some guitar dominated and heavy rocking music there aren't many more crosstalks between THE GUV'NORS and the mentioned bands, 'cause they sure not play Hardcore and also no kind of what-so-ever Metal music stuff. Hm, and when I'm correctly informed than some guys of THE GUV'NORS had once been involved in the band the HOOLIES from, right, also from Denmark (as if this would have been this hard to guess, right, haha;-)...), they shall be something like a legend or so, but I just don't know anything of them. So maybe I just missed a legend or they aren't that legendary at all, but what-so-ever, haha;-). So, finally now to this record here: First of all, "THE PINT OF NO RETURN", what a great record title, thumbs up!!! And damn it, but back in the days I took this pint for far too often, or at least I think so today, haha;-)!!! So, what are THE GUV'NORS playing?!? Music!!! (Ha, am I not funny today;-)...) I would describe them as a through and through Rock & Roll band, okay, okay, let us call them a Street Rock & Roll band to get this straight. A lot of hard and heavy, yet straight but also diverse rockin' and rollin' guitar work, full of power and energy and forceful guitar riffs, yet also completly filled with great melodies (just listen to the leads, sometimes really awesome) and really good guitar solos. Made round by a very crunchy and forceful rhythmsection, very loud and full crew back ups, and the cheeky and fresh, yet with a lot of power cantillated lead vocals by the singer, a danish Skinhead veteran if you ask me, are really giving the songs their crown. Really damn good!!! It's Rock & Roll, okay, Street Rock & Roll, and no Oi! band after all, but I don't think that this is so important at all, and I also think that if you like THE CORPS, THE BRIDGEBURNERS, and MURDERER'S ROW, then also THE GUV'NORS should be a band for you, even they differ quite a bit from the mentioned bands (like also the mentioned bands to differ much from each other at the end of the day), because also THE GUV'NORS have their very own identity, but the mentioned bands can pretty good show ya which direction this danish Rock & Roll booze hounds do take with their music. A big, big, big bunch of (very) good old Rock & Roll music from AC/DC, ROSE TATTOO, SLADE, STATUS QUO, and MOTÖRHEAD as well as NASHVILLE PUSSY combined with classical british Oi! music like COCK SPARRER and also THE BUSINESS, some traditional Punkrock like the (later) RAMONES, and all made round by some 'New' Scandinavian Rock bands like the BACKYARD BABIES, THE HELLCOPTERS, THE BONES, and TURBONEGRO, and all cultivated with some very few (old) GUNS'N'ROSES influences, that's what you get from THE GUV'NORS, and all done very well-versed and really, really good, this guys can play damn good and they also know how to write songs, thumbs up!!! There's not that much left to say at this point, hm, or at least I think so... Okay, maybe I should do some namedropping and tell ya that Don Powell of SLADE plays the guitar also on this record. Okay, I've told it to ya. What else? Ah, yes, on "ICH TANZE NUR FÜR SEKT" (great!!!) we can also hear an organ, and that's always just great!!! Something more left to say?!? It's a really damn good record, that just failed to convince me more because it's sometimes just to 'funny-sunny' happy for me, I miss some of life's harshness in it. But okay, we all have it much too much every fuckin' single day, so why not sometimes just listen to some happy Party Rock & Roll music, right?!? Sometimes it is a little bit to Rock & Roll, I would love more Oi! and Punk in it, but why not sometimes just listen to some happy Party Rock & Roll, right?!? Hm, I think I saiI asked this question already, right, haha;-)... It's a damn good record, of a damn good and very sympathic and authentic band, so give it a try, 'cause it will be more than just worth the time. The lyrics fit 100% to the mood of this record, and it comes as a LP (in a great artwork) with the CD on top of it, and all in a very powerful and clear production sound. Not much left to say but thumbs up!!! Cheers & Oi! (8 of 10 points)
(http://www.myspace.com/theguvnors)
No you get the official (?) video clip to their great hymn "40, fat & finished", and that's really great, so have a drink, have a laugh, turn the music loud and have a cheers to the guys of THE GUV'NORS!!! Would love to see and hear more of such bands instead of this whole stupid self proclaimed tough guy jerks runnin' around and playing their retarded noise with their stereotypical clichè bands...