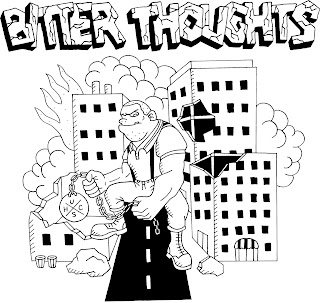 And here it is, the second demo of BITTER THOUGHTS respectively the review up here by me for you of it. And like their first output also this one is (for what I know solely) released as a MP3-Download on their official Bandcamp site (the link will then close this review). Already with their first output, the "TAKERS - DEMO 2011" from - exactly, no one needs to be a genius to come to this very conclusion right here right now... - 2011 they kicked it all off damn strong and being now back in 2012 they even raised their standard and lifted the level of quality a good bit further on up high. Roughnecked and silverbacked Tough Guy Mosh Hardcore enriched by damn great and fresh and grapping Beatdown parts coming straight from out of the cold concrete of the windy city of Chicago, with songs like sledgehammers and crowbars swinging and breaking faces, necks, bones and stomping and ramming every only possible resistance down. Travelling between influences of the Old and the New School with hopping also to the metallic Beatdown department and all fueled and fired by a massive New York as well as New Jersey Hardcore mixery, with not copying anything or anyone here and also staying straight away from being or becoming any cheap dull and dumb retro crap affair. Influences of FURY OF FIVE and BIOHAZARD are clearly to hear, as well as here and there some few MADBALL and also some pretty few TERROR impressions left their mark in the music of BITTER THOUGHTS and also they remind me somehow a little bit of great Hardcore acts from Finland like for example WORTH THE PAIN or the awesome ST. HOOD, so you may have a pretty good impressions of what the BITTER THOUGHTS are all about, but keep in mind that you should not expect any sort or kind of rip off, they already showcased in 2011 a strong own identity and today they made their characteristic and charismatic unique own identity even far more clear and displaying it even far more stronger, and that's just great, if not more than just this, thumbs up, period. Expect tons and tons of militant battle-scarred brawling and smashing massive, harsh, heavy, strong and on top of it even damn diverse and multi-layered skilled guitar work, truckloads full of awesome shredding and buzzing, evil and heavy sawing bass playing (just listen to the great beginning of the opener "SOLITARY", ass kicking galore), cracking and massive stunning fast and skilled diverse drumming, wall down tearing gang shoutings, and above all crowning it all awesome charismatic hard, dry, throaty, angry, pissed off and harsh charismatic lead vocals in the way of slightly screamed shouting, amazing. We get three songs at all in all in all about six minutes and I simply can't get enough of this stuff. On top of it again intense lyrical content (intense like the musical contenet and delivery of this very demo), a strong and high quality underground battlezone production sound and a very cool and just great artwork, Skinhead on the ramapage - style, great, but don't ask me about the Skinhead imagery here in case of this band, I have not a single clou, anyhow, just great. This demo has together with the demo of Boston's WORLD WAR IV all the potential to clearly become the demo release of the year and there must be at least one good Hardcore label out there that gives this guys in BITTER THOUGHTS as soon as possible a fair and proper record deal. And you better get this demo, highly recommended!!! Amazing!!! HARDCORE!!! FIST!!! (10 of 10 points)
(http://bitterthoughtshc.bandcamp.com/)
(http://www.facebook.com/BitterThoughtsChicagoIl#!/BitterThoughtsChicagoIl)
Eingestellt von Manslaughter-Andy (aka Andy Sinclair @ Facebook) um 16:57