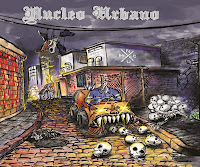 A pretty cool band from Montevideo, Uruguay that I dsicovered recently, again on my search through the web for some new good stuff of bands that I more or less don't already know from somewhere anyhow. This is their demo release from, you got it... right..., 2011 and this is for all what I can see at their Bandcamp site currently only released as a official MP3-Download by the band itself (yes, you know the deal, the link to the site and with this the download will close this review, as usual) and it is also their debut release so far, released by the tenth of November of 2011 by the band itself the do it yourself way, for all what I see there. Hm, and thinking about it then I have to admit that this and and their very demo album release here is my first experience with bands from Uruguay, no matter if Hardcore, Punk or what kind of musick ever else. So, okay, enough of the small talk so far. NUCLEO URBANO play a pretty stylish Old School Underground Hardcore bulldozer sound'n'style that thrashes and skates grinding everything deep down ito the ground, something that you may already have expected by taking a look at the above to see picture that shows the cover artwork of the demo with it's strong late-1980's/1990's spirit. They play it with a strong thrashing and nicely done metallic approach and huge influences of mid 1990's NYHC like for exampe PRO-PAIN during this time are clearly to hear and beside this somehow D.R.I.  and slighty also some only very, very few CRYPTIC SLAUGHTER come to my mind and here and there (especially "TINTA EN MI PIEL" points that out clearly) influences of dirty and hard straight ahead fast forward Punk shine also through, as well as good heavy stomping Mosh parts and angry fist in the air parts are here to be found to make you go rampage or something like this. Expect all in all six songs in about fourteen minutes somewhere between thrashing and skating-grinding D.R.I. and angry and moshy PRO-PAIN fuled by heavy shredding Punk full of harsh guitars, pissed of vocals, full crew back up chants and shouts, sawing bass work and massive pounding drumming. Songwriting is on the right side and pretty good, no boring retro feelings coming up, to play they know anyhow pretty strong as well, and if they do it all in the future a bit more persistent and tight and work here and there some nice suprises and a clear own identity into the mix this all will become even better. But also so already a truly good band more than just worth checking out. To the lyrics I can't say anything (not really my language, to say it so), but the dirty production sound is pretty strong and heavy, and the cover artwork is great. Check 'em out, a good band we should keep an eye on. HADCORE!!! FIST!!! (8 of 10 points)
(http://nucleourbano.bandcamp.com/)
Eingestellt von Manslaughter-Andy (aka Andy Sinclair @ Facebook) um 12:39