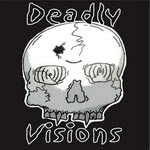 This is a demo release of an to me before this one totally unknown in Sydney, Australia based Hardcore band that I got known to some time ago back due to the great "HARDBOILED" Hardcore fan-/webzine (http://www.hardboiledzine.com/ -a great site that you should check out on a regular basis). DEADLY VISIONS started in early 2011 or so and for all what I understood this is their very first output and it's also at least for all what I understood and if I understood it correct solely released as a MP3-Download (at least outside Australia or something so like this). DEADLY VISIONS are exactly on my page and beside this it's undeniable that they are already a fucking really damn good band that deserves by far more attention then they probably currently get and this as soon as possible. This is pretty modern ultra violent Hardcore with a well dosed Metal influence and clever arranged and good worked out and in Breakdowns somewhere between New York Hardcore in the tradition of first and foremost MADBALL and some let us call it new school old school L.A. Hardcore born and bred by the grandmasters in TERROR, and if the mentioned both bands are on your list of favorites you should make sure to know the DEADLY VISIONS as well because then they will also land on your list of favorites, not at least because even they are pretty clearly to locate somewhere between MADBALL and TERROR they also offer and showcase already a very strong identity of their own and this is just great of them. Heavy guitars blend in with a harsh bass and massive pounding drums, melted together with fat and broad crew shouts and cultivated by very heavy throaty shouted and pissed off spitted charismatic lead vocals, crushing through in with a bulldozer like energy and heavyness level, and all delivered by skilled musicians via very strong songwriting, thumbs up way up high for that. Next time settle it all a little bit more tight and consequent together and work out this great intro track and the rating will be even higher. On top of it we get good lyrics, a forceful production sound and a nice artwork. Get this demo and  support this band. And hopefully someone gives them pretty soon a fair and good proper record deal. Check them out, the DEADLY VISIONS, period. (8 of 10 points)
(Download: http://www.mediafire.com/?ta3axs8j963cmtw)
(Contact: http://www.facebook.com/deadlyvisionshc?filter=2)
Eingestellt von Manslaughter-Andy (aka Andy Sinclair @ Facebook) um 22:16