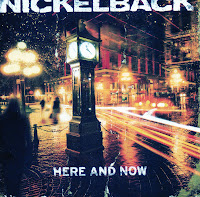 ("Roadrunner Records"; CD):
Chartstorming Megasellers are next up here to freshen it all up, all the angry and noisy Underground Hardcore noise and other stuff up here, haha;-). I always liked this band more or much pretty well and pretty much. So shut up if you now think "WTF?!?", yes, this is corporate rock music and I think it's pretty bizarre if I look back at times when "ROADRUNNER RECORDS" used to release classics of extreme musick like DEICIDE and OBITUARY and other legendary stuff like SEPULTURA and so on and now seeng them releasing ''soft'' Hard or Heavy Rock music the modern way like NICKELBACK but anyway who am I to judge anything or so on. I first listened to NICKELBACK at the end of the 1990's when they've released their back then album "THE STATE" (or something like this) and used to come off pretty big since then together with other bands more or less of this kind like PUDDLE OF MUDD and THREE DOORS DOWN and other bands like this, maybe to name STAIND and the from then on up to now more and more into Rock and Hard Rock tending FOO FIGHTERS as well. NICKELBACK are still around and used to become bigger and bigger since then as well as more and more heavy since then. So today their music is marked by dynamic and forceful, damn heavy and really pretty hard yet melodic and emotional guitars, all done truly well-versed and multi-layered as well for sure, and also marked and dominated by the damn charismatic and full of expressions and emotions being lead vocals, and the rhythm section is backing it all up the beefy way and the massive kind. Damn strong musicians are here anyhow at work and the songwriting is also pretty interesting and grapping the very most of the time. Combine METALLICA to the times of their legendary and still amazing self-titled and so called "BLACK ALBUM" with MEGADETH to their "YOUTHANASIA" period with modern Rock like today's FOO FIGHTERS and other stuff like this and this all done the very stand-alone way of NICKELBACK then you know what you get, from emotional (Power) Ballads to angry and smashing modern Heavy Metal songs we get a lot of different stuff up here. Also very diverse and strong lyrics, a great artwork and a outshining production sound on top of it as well. So if you want some corporate Rock music then make sure that it better is this album and not some other corporate Rock music album stuff, period. (8 of 10 points)
(http://www.nickelback.com/)
Eingestellt von Manslaughter-Andy (aka Andy Sinclair @ Facebook) um 23:09